Just listed a nice, affordable horse farm with everything for the horse lover including a 3/2 manufactured home in immaculate condition, 4 stall barn, equipment/trailer storage, outdoor arena, approximately 5 acres in pasture, and riding trails. Click here for details and pictures.

This 4 Bedroom, 3.5 bath house w/in-ground salt water pool, approximately 12 acres in pasture, and a long range mountain view is home to horses, livestock, and a brood of chickens. It’s a great place to enjoy the true country life. Click here for details.

Just listed a 22 acre property that has everything: a spacious, very comfortable, upscale home and wonderful horse facilities including a very functional center aisle barn, riding arena, and round pen. Situated on the Pickens/Dawson County Line, this property is centrally located between GA 400 and Interstate 575.  If you’re looking for your dream horse property take a look at this one.  Click Here for details. 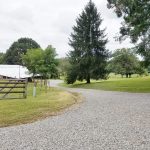 This 60 acre farm situated along Sharp Mountain Creek in south Pickens County just north of the Cherokee County line was owned by members of the Cagle family for more than 100 years before it was purchased by Roger Harington in 1981.  The farm land was originally purchased by Peter Cagle in 1871 and he built the small farm house in 1875. He and his wife, Martha Emilene, had 11 children the youngest of whom was Peter Sherman Cagle who was born in 1893.  Sherman lived his entire life in that house and overtime added several rooms to the house and, in 1953, he veneered the outside walls with split-faced marble mined locally in Pickens County giving the outside its current look today.   During the Cagle years the farm had cotton and corn crops, poultry houses, and raised Angus cattle.  Today, the poultry houses are used for hay and equipment storage. The current owner, Alex McArthur, continues to run cattle on the property while he remodels the old farm house.

This wonderful property is rich in local history. Today, sitting on the back patio which overlooks the pasture land with the cows grazing and the hay fields being cut, it is easy to imagine the stories that can be told about this historical property.  With ownership of this farm comes the thrill and responsibility to be a steward of the land protecting the Cagle legacy.  Click Here for details.